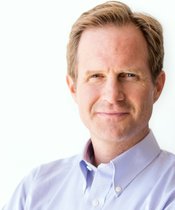 My work spans a variety of topics in applied microeconomics. This selection of publications provides a sampling of these areas. The non-technical summaries convey the basic idea of the article (click the links for full details with published abstracts). For a complete list of published research, see Publication List. 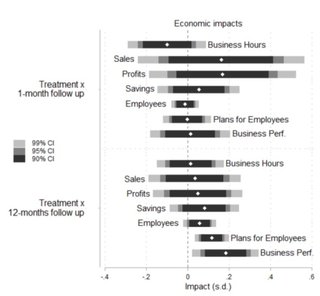 Enhancing early childhood nutrition can increase the returns to other investments in human capital, including education. Do parents perceive and respond to these complementarities? We examine how parents’ growth perceptions and educational aspirations for their children change in the wake of a randomized controlled trial of a nutritional supplement. The intervention increased parental perception of their kids’ physical and cognitive development several years after the trial ended and raised their educational aspirations for girls in particular. Such multiplier effects may enable nutrition interventions to have outsized long-run impacts. Project Website 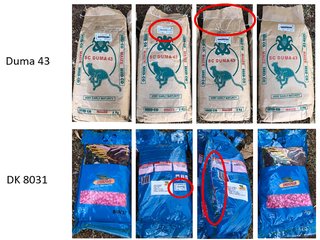 Hybrid seeds can dramatically increase yields, but farmers in Africa often worry about whether these expensive seeds are legitimate. Such concerns can lead them to shy away from investing in these seeds and the additional inputs they require. In western Kenya, we elicited farmers’ willingness to pay (WTP) for hybrid maize seeds from different sources and in bags of varying conditions. We test the impact of training to help farmers decipher packaging signals of seed quality. Only with training did farmers respond to tell-tale warning signs on seed bags. Despite their prevailing fear of fraud, they do not - as a matter of practice - try to discriminate quality using packaging signals. 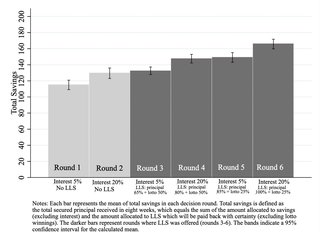 In Haiti, where formal financial services are scarce, the poor lack the financial inclusion necessary for saving and instead spend their incomes at lottery stalls. Leveraging the prominence of lotto culture in Haiti, we conduct an experiment where participants can allocate funds across different savings mechanisms, including a lotto-linked savings (LLS) product that provides lottery credit rather than interest payments. We find that the presence of a lottery component in the LLS product greatly increased savings, even when the savings-to-lotto ratio was high or expected returns were lower than those of traditional saving.

Enhancing early childhood nutrition can increase the returns to other investments in human capital, including education. Do parents perceive and respond to these complementarities? We examine how parents’ growth perceptions and educational aspirations for their children change in the wake of a randomized controlled trial of a nutritional supplement. The intervention increased parental perception of their kids’ physical and cognitive development several years after the trial ended and raised their educational aspirations for girls in particular. Such multiplier effects may enable nutrition interventions to have outsized long-run impacts. 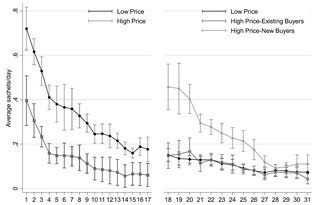 Improving early childhood nutrition, including via micronutrient supplementation, can have big effects on cognitive and physical development, affecting human capital and economic productivity in adult years. However, micronutrient supplements have unique demand- and supply-side features that can complicate the delivery of these products to needy individuals. To evaluate the nature of household demand for nutritional supplements, we conduct experimental auctions in Burkina Faso to estimate demand for these supplements. Using a loyalty card that offers a small reward to consistent purchases, we find encouraging evidence of their potential to stimulate demand, which is otherwise very sensitive to price. Overall, the results suggest a need for creative public-private delivery strategies in order to tap the potential benefits of micronutrient supplements for children at risk for severe acute malnutrition.

“Poverty, Aspirations and the Economics of Hope,” Economic Development and Cultural Change, (2018) (with Bruce Wydick)

Hope and aspirations have become a lively research area among development economists. We provide a survey of the literature relating to hope that pre-dates this recent interest in economics and that ranges from philosophy to psychology to theology. We construct an economic model that builds on Snyder's Hope Theory from psychology and evaluates incorporates hope as aspirations, agency, and pathways. The model highlights the role hope can play in shaping the causal effects from development interventions that stem from an interaction between these three factors of hope. We discuss the interplay between the hope and poverty dynamics. 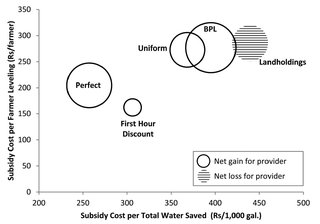 Improving the day-to-day livelihoods for much of the rural poor involves improving agricultural productivity, something that is becoming increasingly dependent on the private sector for new technologies and techniques. There is a lack of information, however, concerning farmers’ valuation and demand for these new technologies. Motivated by this void, we use experimental methods to characterize farmers’ heterogeneous demand for, and benefits from, a new agricultural technology in eastern Uttar Pradesh, India, in order to inform segmentation and targeting strategies. We argue that experimental auctions are a useful tool for this task. This analysis also finds that targeted strategies, such as a first-hour discount, are more cost-effective than uniform subsidies. 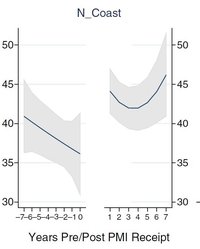 “Multidimensional Responses to Disease Information: How Do Winegrape Growers React to Powdery Mildew Forecasts & To What Environmental Effect?” American Journal of Agricultural Economics, (2016) (with Nicholas Magnan and W. Douglas Gubler)

Access to better information can dramatically improve realized outcomes. In agriculture, accurate forecasts can enable farmers to adjust production strategies and manage risk, ultimately benefiting consumers and the market. However, the fact that producers can adjust along several dimensions simultaneously makes characterizing their response to new information as challenging as it is important. We test how California winegrape growers alter their disease management strategies in response to powdery mildew forecasts and estimate the environmental effects of these responses. In practice many growers simultaneously adjust what, when, and how much they spray. Crucially, the net environmental impact of this multidimensional response may actually be negative despite the fact that these forecasts have been widely touted as environmentally friendly. 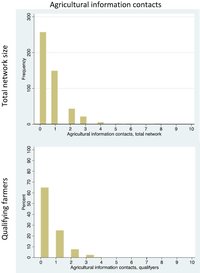 Technological innovation can make agriculture more productive and more profitable for the rural poor. Agricultural technologies typically spread as farmers learn about profitability through social networks. However, variations in the amount and type of information that farmers receive through their social networks can fundamentally shape social learning and technology dissemination, resulting in slow adoption, non-adoption, or dis-adoption. We use a pair of experimental auctions for an agricultural technology to capture demand before and after its introduction in order to compare perceived benefits before and after social learning occurs. Ours results show that having a benefiting adopter in one's network increased demand by over 50%, whereas having a non-benefiting adopter had no effect on demand.

“Getting Patents & Economic Data to Speak to Each Other: An ‘Algorithmic Links with Probabilities’ Approach for Joint Analyses of Patenting & Economic Activity,” Research Policy, (2014) (with Nikolas J. Zolas)

International technological diffusion is a key determinant of cross-country differences in economic performance. Patents offer a proxy for this diffusion, though using them for economic analysis requires that they be tied to a measure of economic activity. A detailed link between technological and economic activity would improve the assessment of policies that aim to promote innovation, as well as evaluate the relationship between technological change and economic development. In this paper, we propose an algorithmic approach to constructing such a link that enables researchers to analyze important relationships between patents and a wide range of economic activities at an unprecedented level of disaggregation. 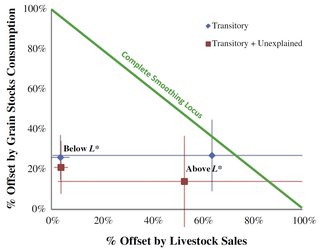 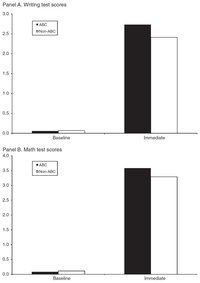 Nearly 1 in 5 adults worldwide is unable to read and write in any language. Adult education programs can bridge this gap, though they often yield low enrollment, high dropout rates, and rapid skills depreciation. Greater mobile phone coverage in the developing world has the potential to increase the incentives for and facilitate the acquisition of literacy and numeracy skills, as well as provide technology for other purposes, such as obtaining market information. We report the results of a randomized adult education program in Niger, where a mobile phone-based component was added to an otherwise standard adult education program. Results show that mobile phones improved test scores and led to a greater persistence of educational improvements along with increased student effort and motivation within and outside the classroom.

The development and effective diffusion of new agricultural practices and technologies will largely shape how and how well farmers mitigate and adapt to climate change. This is nowhere more pronounced than in developing countries where agricultural productivity remains low; poverty, vulnerability and food insecurity remain high; and the direct effects of climate change are expected to be especially harsh. However, there are many agronomic constraints, in both the private and public sectors, that could impede poor farmers’ access to and use of new technologies. We derive six policy principles and use these principles to suggest several specific investments and policy priorities. 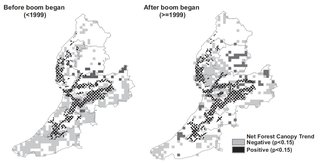 Morocco's argan oil is now the most expensive edible oil in the world. NGOs, international and domestic development agencies, and argan oil cooperatives have aggressively promoted the win–win benefits for both local people and the health of the argan forest. This paper looks to test some of these claims. We find that some rural households have been able to increase consumption, increase their goat herds, and send their girls to secondary school, though the boom has not incited investments in longer term tree and forest health. There is a mismatch between private incentives and sustainability of the forest that not only bodes poorly for the argan forest in general but interacts with other environmental factors in negative ways, threatening the broader biodiversity of the region. 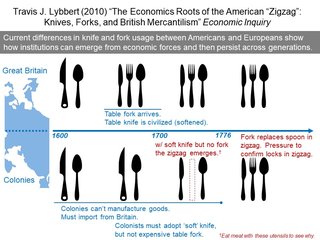 Relative prices that prevail at critical times can shape culture in precise ways. For example, this paper argues that the difference between Europeans’ and Americans’ use of knives and forks is an artifact of British mercantilism, which inﬂated the price of tableware in the American colonies, preserving the fork as a colonial luxury while it remained an ordinary utensil in England. The Navigation Acts, which placed a heavy freight on imported manufactured goods, made it difficult for luxury goods, such as forks, to become commonplace in the colonies. However, knives and spoons continued to be imported from England—knives which were evolving with the British’s use of the fork, and so became rounded. This rounded tip forced colonists to adopt a new method of handling utensils: the “zigzag,” which would continue to be a trait of American eating for centuries to come. 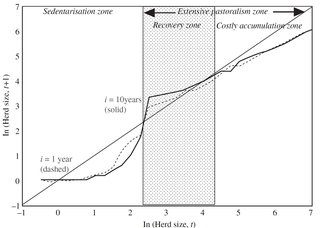 We use herd history data collected among pastoralists in southern Ethiopia to study stochastic wealth dynamics among a poor population. Although covariate rainfall shocks plainly matter, household-speciﬁc factors, including own herd size, account for most observed variability in wealth dynamics. We ﬁnd no support for the tragedy of the commons hypothesis. Biophysical shocks move households between multiple dynamic wealth equilibria – the lowest suggesting a poverty trap. These ﬁndings have broad implications for development and relief strategies among a poor population vulnerable to climatic shocks and have motivated several efforts along these lines since the paper was published.