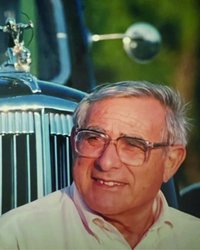 Leon Garoyan, emeritus cooperative extension specialist in the ARE Department at UC Davis, died peacefully at home on March 26 from cerebral vascular disease. He was 96 years old.

Lee Garoyan’s life is a classic immigrant success story. He grew up in a poor, but educated, family of immigrants on a 20 acre farm in Fowler near Fresno. Lee was a man of many parts and he loved his family and his friends, good wine, German shepherds, and economics. One of his all engrossing hobbies was the restoration and preservation of classic cars. He owned many beautiful cars in his lifetime, and won several major awards with his Pierce Arrows and Rolls-Royces. He was appointed as an official judge for both these makes.

Lee’s parents always emphasized education and he attended Fresno State and then Cal Poly graduating with a degree in horticulture. After six years as a horticultural farm advisor in Oregon he developed an increasing interest in economics and enrolled for a Master’s degree in agricultural economics at the University of Wisconsin. Two years later he was invited back to Wisconsin for a PhD and graduated in 1960. In 1961 his dissertation was published as a book titled Changes in Market Structure of Grocery Retailing. This was the first of several professional and personal books Lee wrote throughout his life, the most recent being published last year.

Based on his research, Lee became a sought-after teacher and extension economist, first in Oregon and then at UC Davis. At the start of his career he served in the Kennedy administration as a staff economist, and later his service to his country took the form of voluntary consulting for the CIA on the food production and marketing systems in Eastern Europe and Russia before perestroika. Throughout his professional career he worked with many farmer cooperatives, both in the US, Chile, and many parts of Eastern Europe. This work culminated in his role as the founding director of the Statewide Center for Cooperatives at UC Davis.

Lee will be greatly missed by his family and friends who can take some solace in that he had a long, full, and well-lived life.