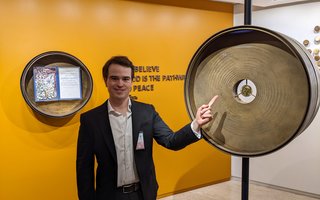 Ed's son, Julian, points out the WFP's Nobel Peace Medal at the entrance to their Rome Headquarters where the event took place.

At the second regular session of the World Food Programme (WFP) Executive Board meeting in Rome, ARE Distinguished Professor Ed Taylor presented findings from the study “Economic Impact Assessment of World Food Program Expenditures in East Africa.” A special side event was dedicated to present and discuss the findings. Ed was joined on the panel by the WFP’s Regional Director for the WFP East Africa region and the Kenyan Ambassador and Permanent Representative to the WFP.

The report, co-authored by Erwin Corong, ARE PhD alumnus Justin Kagin, Ed Taylor, and Dominique Van Der Mensbrugghe, assessed the total annual economic impact of WFP’s spending to carry out its humanitarian operations, both within countries and across the East Africa region. It found that WFP spending has a large impact on production and GDP in most countries, provided labor and capital are available to support economic growth. Using the Envisage model, which is structurally related to Purdue University’s GTAP platform, the authors found that each dollar spent by the WFP’s RBN office increases real income (GDP) in East Africa by as much as $3.68 and total production by as much as $6.47. WFP spending creates 365,606 jobs for unskilled workers and 20,047 jobs for skilled workers in the region.

In 2020, the WFP received the Nobel Peace Prize "for its efforts to combat hunger, for its contribution to bettering conditions for peace in conflict-affected areas and for acting as a driving force in efforts to prevent the use of hunger as a weapon of war and conflict." This study reveals that the WFP also generates substantial economic benefits for the countries where it operates.