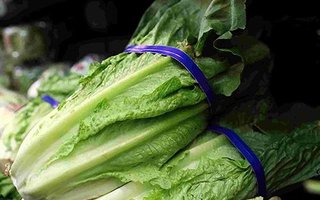 The new report “E. Coli in the Romaine Lettuce Industry: Economic Impacts from the November 2018 Outbreak” was co-authored by Associate Professor of Teaching Kristin Kiesel, Professor and department chair Rachael Goodhue, Distinguished Professor Richard Sexton, and Postdoctoral Scholar Ashley Spalding, all from the UC Davis Department of Agricultural and Resource Economics. The report analyzes the economic impacts of the November 2018 food safety advisory, warning U.S. and Canadian consumers, retailers, and restaurants not to eat, sell, or serve any romaine lettuce or mixed salads containing romaine due to an outbreak of E. coli infections linked to romaine.

The authors identify two essential elements of damage to supply-chain actors from the incident and its aftermath—price effects caused by disruptions to both supply and demand, and quantity effects caused by removal of romaine product from the supply chain and, later in the advisory period, from an inability to sell product due to reduced demand.

The report shows prices received for the main romaine-based bagged salads (hearts, blends, kits, and premium classics) changed relatively little in most cases, reflecting the fixed-price basis of processor-retailer contracts. However, the authors did detect a significant and persistent decrease in the price for romaine hearts throughout most of the 12 weeks of the aftermath period. Hearts is a romaine product that is easily identified by consumers, and it may have suffered the most severe demand impacts due to the incident and advisory.

Industry damages due to the outbreak varied among actors. Due to the nature of the contracting for leafy greens, growers were largely insulated from the economic fallout caused by the incident, while processors and shippers were hit hardest. The authors estimate that processors and shippers lost $20.6 million due to having to pull harvested product from the supply chain and another $37.3 million from product under their control that could not be harvested or sold due to the advisory and reduced demand for romaine.

Total estimated loss for grocery retailers was $25.7 million: $18.3 million due to having to pull product that was under their control from shelves and distribution channels plus another $7.3 million due to price changes for their purchases and sales. Conversely, food service operators experienced little net loss based on the report analysis. These firms lost $3.6 million from inability to sell product under their control when the advisory was issued, but gained about $2.4 million from reduced acquisition costs, resulting in an estimated net loss of only $1.2 million.

The net loss to society from the E. coli incident involves more than the leafy-green supply-chain participants. It also involves consumers who were unable to access romaine products during the early weeks of the incident and in the later weeks due to fears regarding product safety. Losses were also incurred by suppliers of inputs, such as labor and materials, to the industry who lost employment and sales due to the incident. Estimates indicate a total social loss in the range from $280 to $350 million depending on various price elasticities considered.

The entire Fall 2018 incident was traced to a single farm but resulted in widespread unavailability of romaine products, fears among some consumers about the safety of eating romaine, and significant economic losses incurred by a wide range of participants in the leafy-greens industries and beyond. the magnitude and breadth of losses from this single incident indicated the importance for the industry to adopt universal food-safety standards that can either prevent or, at worst, sharply reduce the likelihood of such incidents occurring in the future.

The full report is available here.