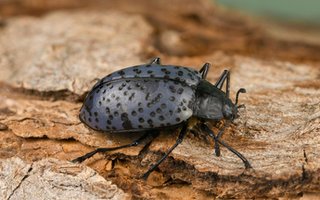 Over the past two centuries, thousands of non-native insects have hitchhiked to the United States in packing material, on live plants, and in passenger baggage. Scientists with two U.S. Department of Agriculture (USDA) agencies and their partners used the history of live plant imports and invasion by a common group of insects to estimate the rate at which new insects are arriving and how many new insect species may yet be in store for U.S. forests and agricultural fields.

Findings suggest that efforts to reduce biological hitchhiking on live plant imports, often referred to as “biosecurity,” are working. However, more than a century of invasion by Hemiptera insects also suggests that increased trade might offset the effects of improved biosecurity. As many as 25 percent of invading Hemiptera insects may have yet to be detected in the nation’s forests and agricultural fields.

The study, “Hidden patterns of insect establishment risk revealed from two centuries of alien species discoveries,” was published this week in the journal Science Advances. The study’s lead author, Matthew MacLachlan, a research economist with the USDA Economic Research Service, and co-author Andrew Liebhold, a research entomologist with the USDA Forest Service, examined records from 1854 to 2012; they found that 930 non-native species of plant-feeding insects in the Hemipter order have invaded the United States. The research team was able to identify the origins of 770 of those species.

“Our work quantifying the establishment risk posed by imports from distinct regions and how these risks have changed with the accumulation of trade history and time gives policy-makers a better picture of the risks of insect invasion per unit of import and region,” MacLachlan said.

Hemiptera are small, plant-feeding insects (the order includes true bugs, aphids, and scales), and many of these species cause considerable damage to agricultural and forest plants. The Hemiptera order includes more than 80,000 insect species, and accidental transport of live plants or plant products is the main pathway by which most Hemiptera move among continents.

“Data on historical discoveries of non-native Hemiptera in the United States helped us estimate rates of new species establishments that may occur as a result of plant imports from various world regions today,” Liebhold said.