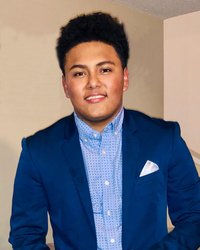 An interest in business and numbers led Erick Tobar to the Managerial Economics major. Tobar, an incoming transfer student, who hopes to become a CPA, said that when deciding where to go after community college, attending the University of California was always his top goal. He chose UC Davis because of the university’s cutting-edge research and culture of community involvement and inclusiveness. Tobar says that he wants to become an accountant because, “I like numbers, and I feel I can contribute to society by pursuing a business degree.” With his career goals in mind, business economics is his major emphasis, and he hopes to eventually work to earn his MBA or pursue a Ph.D. degree.

Tobar, who originally hails from Guatemala, came to California six years ago following a family tragedy. He focused his efforts on learning and working to help support his family. Erick was recently featured in a New York Times article about this year’s incoming class- historic because for the first time, Chicano and Latinx students make up the largest group of Californians admitted to the UC system.

As a transfer student, Tobar is especially looking forward to being a part of a broader student community and joining on-campus organizations like the Davis Accounting Society to help develop professional networks and build friendships. He is also excited to pursue his athletic interests in soccer and mountain biking.

It is clear that Tobar will be a great addition to the Managerial Economics major and campus at large - when asked about why he would like to start his own business someday, he said, “I want to make a positive impact in the world, and success isn’t just about making money, it’s about helping my peers and giving back to my community.” We are happy to welcome Erick to the Managerial Economics major!