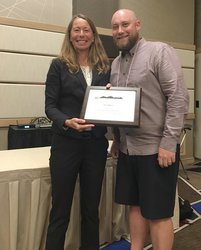 ARE PhD Candidate Tor Tolhurst won the WAEA Outstanding Graduate Paper Award for his paper, "Model-Free Bubble Detection of a Speculative Asset Bubble: Evidence from the World Market for Superstar Wines." He received the award at the 2019 WAEA Annual Meetings in Coeur d’Alene, Idaho, on July 2. The judging committee considers the importance of the problem or subject, significance of the results, quality of the work, and effectiveness of reporting.

Mr. Tolhurst examined a unique event that occurred between 2009 and 2011 in the world market for superstar Bordeaux wines. The price of one wine, Lafite, increased by a factor nearly ten, while prices of its nearly identical peers (on multiple dimensions) increased by a mere factor of five. Using a concentration inequality to bound the fundamental relationship between assets and to find the first direct evidence of a bubble that is independent of a structural valuation model is the focus of his research. Tor Tolhurst stated that he “was intrigued by the anomalous nature of the event---bubbles are a rare but important economic phenomena---and the possibility that its unique circumstances could alleviate longstanding measurement issues, which have plagued evidence of bubbles in real world markets.”

The WAEA annually presents awards to recognize excellence in the profession. Tor Tolhurst joins a select group of UCD colleagues who have been recognized for their contributions. They include Izaac Ornelas, who won the 2019 Outstanding Senior Award, as well as the following award-winners from past years: