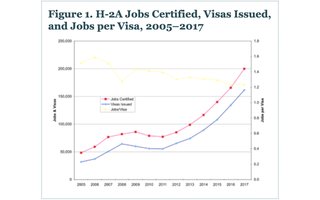 "The Role of the H-2A Program in California Agriculture," by Philip Martin, professor emeritus of the UC Davis Department of Agricultural and Resource Economics, was recently published in Choices, a publication of the Agricultural and Applied Economics Association (AAEA).

In the article, Dr. Martin describes the H-2A program, which "allows U.S. farm employers to request certification from the U.S. Department of Labor (DOL) to have foreign workers admitted 'temporarily to the United States to perform agricultural labor ... of a temporary or seasonal nature.'" He explains the history and advances of the program, as well as farmers’ limited but rapidly increasing use of the program in response to rising wages and a decreasing supply of farm labor.

Dr. Martin ends the article pointing out that farmers initially felt "confident that Trump would persuade Congress to enact an easy-to-use guest worker program. ... Perhaps the major surprise almost two years into the Trump presidency is the absence of a new farm or nonfarm guest worker program. Instead, stepped-up border enforcement has deterred the entry of newcomers who in the past were willing to do farm work, and the increased enforcement of immigration laws has spread fear among farmworkers." President Trump's winery in Virginia and hotels across the U.S. employ H-2A and H-2B workers, and as a candidate he supported guest worker programs for agriculture.