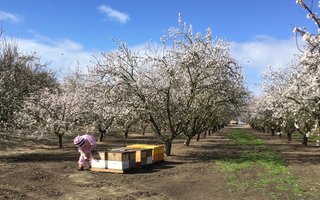 Every winter, most honey bee colonies in the U.S. are loaded onto semi-trucks and shipped to California to pollinate almond orchards. Without this mass migration of honey bee colonies (and their beekeepers), California’s 1.2 million almond acres would not be able to produce the billions of pounds of almonds that world consumers enjoy every year. As almond acreage has increased, pollination fees that almond growers pay to beekeepers have increased, though not enough to incentivize the expansion of existing beekeeping operations. So colonies have had to be shipped from further and further away to meet the demand for almond pollination services—now coming from as far as New York and Florida. Almond growers have seen their pollination expenses increase substantially since the early 2000s, yet almond acreage continues increasing and with it the demand for honey bee colonies. Already utilizing a majority of the colonies in the U.S., almond growers are concerned with where additional colonies will come from and how much their pollination expenses will increase in the coming years.