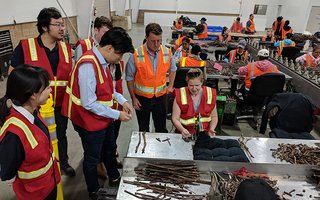 During a tour of Wonderful Nurseries, ARE Ph.D. student Mari Fenton sits at a station to attempt grafting strong rootstock to a grapevine scanned for viruses, the benefit of which is the subject of a master's course project. 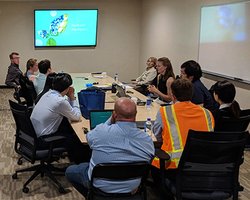 Master's student Emma Gjerdseth, seated to the right, presents to Wonderful Nursery officials the research project she helped complete for ARE 258 Supply and Demand Analysis.

Instead of the standard replication of a research paper, some of this year’s Agricultural and Resource Economics master’s program students took it a few steps further by broadening one. The results demonstrate that if farmers plant virus-screened grapevines in previously untested California regions, the benefits per region are in the tens of millions of dollars.

This work took place in an ARE 258 Supply and Demand Analysis course, which students take at the end of the master’s program. Meant to translate economic theory to empirics, the final project of ARE 258—also the capstone project for the M.S. program—was traditionally to give students the data and econometric model of a published study and have them replicate part of it.

“This year, we partnered with The Wonderful Company to make this final project closer to what students will do as a job post-graduation as a research analyst or project manager,” ARE Professor Travis Lybbert said.

Working with The Wonderful Company/Wonderful Nurseries over the previous year, Lybbert coordinated the project to broaden “The Economic Benefit from Virus Screening: A Case Study of Grapevine Leafroll in the North Coast of California,” by Kate Binzen Fuller, Julian M. Alston, and Deborah A. Golino. This study co-authored in 2015 by ARE Distinguished Professor Alston showed economic benefits of more than $50 million per year, which substantially outweighed the costs for farmers in the North Coast grape-growing region if they purchased and planted grapevines screened for Leafroll virus. Wonderful Nurseries has invested a lot into screening all the planting materials that go through their grapevine facility, and also graft strong rootstock onto each vine. They were interested to see what the model would forecast for other California regions, which could be used to demonstrate to a wider group of farmers the positive profit from using screened vines instead of unscreened ones.

Of the 30 students in ARE 258, nine were selected to participate in this project. In order to adapt the Fuller et al. model for the Central Coast, North Central Valley, and South Central Valley grape-growing regions of California, the students interviewed various experts and researched data to discover regional differences such as land value, temperature, grape varieties, planting density, acreage, yield, disease rate, and more.

“I found it to be a relevant and interesting experience, which provided a ‘real-world’ application of the teachings in the classroom,” said master’s student Emma Gjerdseth, who presented the findings to Wonderful Company representatives at their facility in Waco, Calif.

“I had a lot of fun with this project,” said Mari Fenton, a first-year ARE Ph.D. student. “I really liked working with the people at The Wonderful Company, working on a project that would be seen by more than our professor and classmates, and getting to tour the Wonderful Nurseries facilities when we presented our findings.”

“I was excited and impressed with what the students were able to do in one month with the division of labor as a team,” Lybbert said. “It truly is a unique experience for master’s students.”

After a final report is given to The Wonderful Company, the next steps for this project include Fenton presenting it during the annual Agricultural & Applied Economics Association meeting in August, and Lybbert helping to pull it into a format for possible publication. This also has been a way for The Wonderful Company to formalize a relationship with the ARE master’s program in order to recruit graduates beyond those they’ve already hired from the program in recent years. Other companies have heard and have contacted ARE in order to initiate similar projects/recruiting opportunities.

“The partnership of this and future projects clearly benefits our students and the agribusiness community,” Lybbert added.

“The Economic Benefit from Virus Screening: A Case Study of Grapevine Leafroll in the North Coast of California,” by Kate Binzen Fuller, Julian M. Alston, and Deborah A. Golino. American Journal of Enology and Viticulture 66(2), pp. 112–119 (2015).