Published in Economics Letters: Research Paper by Ph.D. Students Zhu and Gupta about Effects of India's Demonetization on Rural Poor 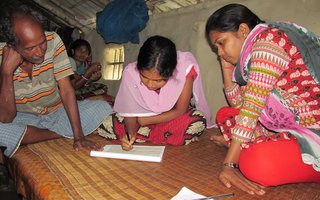 An enumerator trains a school-going girl in rural India on how to fill weekly financial diaries of her family for research study data. 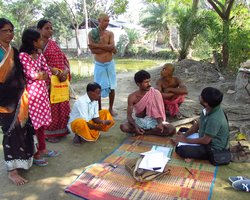 Field discussion takes place on the loss of agriculture and employment post-demonetization in Bamugheri village in Sundarbans, India.

"Short-term effects of India's demonetization on the rural poor," by ARE Ph.D. candidates Heng Zhu and Anubhab Gupta, will be published in the September 2018 issue of Economics Letters and is currently available online. Zhu and Gupta led this research project utilizing funds from the UC Davis Henry A. Jastro Research Award to collect primary data. Collaborators in this project were Binoy Majumder (a local researcher from West Bengal, India) and ARE alumnus Sandro Steinbach (Ph.D. candidate at ETH Zurich). The study employed a high-frequency weekly data collection through "financial diaries" as the survey instrument and used econometric methods to estimate the impacts using pre- and post-demonetization data.

The government of India announced demonetization on Nov. 8, 2016, banning all 500 and 1,000 Indian rupee banknotes in circulation starting at midnight. It gave citizens 50 days (until the end of the year) to exchange old currencies in their possession for higher-denomination currencies. This move—supposedly to curtail the shadow economy, shrink the use of counterfeit currency, and digitize India to a cashless economy—was met with much controversy within and outside India. This research finds that there was an economic loss of about 15.5 percent for the rural poor over the two months post-demonetization. Female-headed households and those with higher levels of unemployment were hit hardest, and households adopted a range of strategies to cope with the shock.

Click here to read "Short-term effects of India's demonetization on the rural poor."