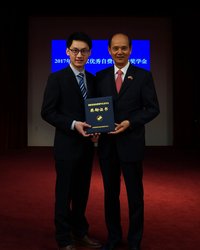 Xiaomeng Cui, left, is presented the award on April 1 from Linquan Luo, the consul general of the People's Republic of China in San Francisco.

Ph.D. Candidate Xiaomeng Cui recently received the 2018 Chinese Government Award for Outstanding Self-Financed Students Abroad. This award was established by the China Scholarship Council in 2003 and approved by the Ministry of Education of the People's Republic of China. It's considered the highest award given by the Chinese government to graduate students studying outside of China who do not receive financial support from the Chinese government. Recipients are chosen worldwide each year for their outstanding accomplishments in any discipline. Among all Chinese overseas graduate students, only 500 are awarded each year.