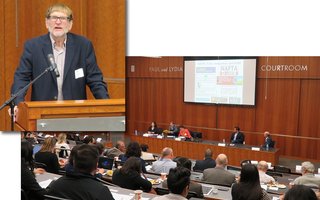 ARE Professor Emeritus Philip Martin addresses the audience at the 2018 NAFTA, H-2A, Immigration, and ALRB Conference at UC Davis in early April. 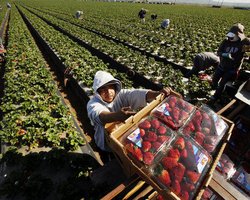 The National Agricultural Worker Survey (NAWS) has become the most frequently consulted source of data on the characteristics, employment and earnings of U.S. crop workers.

On April 12, a workshop was held at UC Davis to discuss the status of the National Agricultural Worker Survey (NAWS), which has become the most frequently consulted source of data on the characteristics, employment, and earnings of U.S. crop workers. The original purpose of the NAWS in 1989 was to estimate the supply of labor to crop agriculture, but the NAWS has evolved into a survey that also collects detailed health and other data on crop workers and their families.

After three decades, the NAWS is at a crossroads. The NAWS finds a largely Mexican-born, male, and unauthorized crop workforce that is aging and settled. The NAWS cannot answer questions about several pressing farm labor issues, including the share of livestock workers who are unauthorized and the characteristics of H-2A guest workers.

The NAWS 2018 workshop reviewed the origins of the NAWS, including the decision to begin a new survey, the current status of the survey, research using the NAWS, and the reactions of NAWS data users. This workshop report aims to encourage DOL to support expansion of the NAWS to livestock and H-2A workers and research using NAWS data.

The NAFTA, H-2A, Immigration, and ALRB conference was held at UC Davis on April 13. The conference examined labor-related issues in California and U.S. agriculture. Labor-intensive fruit and vegetable crops are almost 85 percent of California and 40 percent of U.S. crop sales, farm worker employment has been increasing, and the state's mostly unauthorized farm workers are aging and settling in one place with families that include U.S.-born children.

Four timely issues were discussed. First was the renegotiation of the North American Free Trade (NAFTA) agreement that lowered barriers to trade and investment between Canada, Mexico, and the U.S. Second was the rapid growth in the H-2A program, which certified 200,000 jobs to be filled by guest workers in 2017, including 15,000 in California. Third were the effects of changing immigration policies on agriculture, farm workers, and agricultural communities. Fourth was an update on Agricultural Labor Relations Board (ALRB) activities and court decisions that affect mandatory mediation and conciliation and union abandonment.

This event was possible through the support of the UC Agricultural Issues Center; the UC Davis Gifford Center and Migration Research Cluster; the Giannini, Rosenberg, and WKF foundations; and the ALRB.