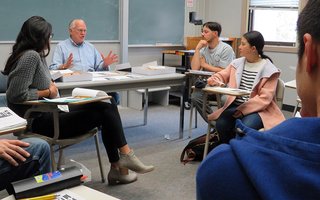 Lecturer Jerry Lundblad speaks to students in the First-Year Seminar “I Want to Be a Consultant, I Just Don’t Know What They Do.” 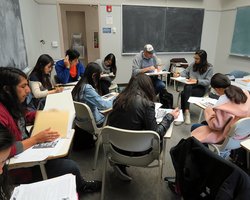 While Lundblad is out of the classroom for 10 minutes, students work together to complete a crossword puzzle as the seminar final. The answers are what Lundblad hopes are the greatest course takeaways, teamwork being an important one.

One of Justin Garey’s greatest takeaways from the First-Year Seminar (FYS) “I Want to Be a Consultant, I Just Don’t Know What They Do” was learning the difference between a process and a project.

“A process needs to be efficient and smart and a project can be quick and ugly, solving the immediate problem,” said Garey, a junior majoring in Managerial Economics. “Applicable to real life, I wish I knew it 10 years ago.”

Lecturer Jerry Lundblad explained that one of the concepts taught in his FYS is that some professions focus on a process, such as the repeated process of maintaining a supply chain. But in the consulting profession, it’s a series of individual projects.

A part-time lecturer at UC Davis the past 12 years, much of Lundblad’s career was spent in consulting and corporate and public accounting. Therefore, he thought it appropriate to offer students this FYS in order to share his real-life experiences and “as an opportunity to think about the broad field of consulting as a viable career."

“One thing I see is that the students are quite surprised at the breadth of skills and areas of knowledge that consulting firms hold within their human capital—from psychology to chemistry to economics,” Lundblad said. “So they have a place for everybody in a consulting firm.”

Coursework includes accessing published reports of major consulting firms, as well as reports from the public sector such as the U.S. Governmental Accountability Office and the California Department of Finance.

“I thought it was fantastic,” Garey said. “It’s unreal how much you can learn just by looking at consulting groups’ websites. In looking through their white papers, you could know as much as them in eight months.”

Another part of the course is discussion of key phrases and concepts used in consulting so that students can feel comfortable going into interviews with consulting groups, or on behalf of a consulting firm trying to win a client. Lundblad also gives examples of good and bad resumes. He ends the course telling the class that they’re each invited to visit his office for advice on jobs and resumes.

“I would absolutely recommend this class to any Man Econ student,” Garey said. “It’s very useful.”

Lundblad has been teaching this FYS for six quarters. As for the 2018-19 academic year, “I’ll propose it,” he said. The one-unit course is taught on a pass/no-pass basis.