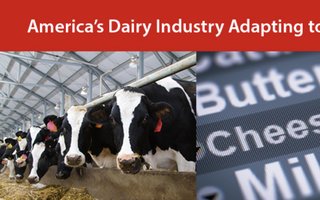 Daniel A. Sumner, Frank H. Buck, Jr., distinguished professor in the UC Davis Department of Agricultural and Resource Economics and director of the University of California Agricultural Issues Center, wrote "New California Milk Marketing Regulations Will Not Change Economic Fundamentals" in Choices, an online magazine that is the principal outreach vehicle of the Agricultural and Applied Economics Association (AAEA).

Federal regulation of milk prices began in 1933 as a central program in President Roosevelt’s New Deal agricultural policy (Sumner and Wilson, 2000). However, after the Supreme Court ruled that many features of New Deal programs were unconstitutional, California enacted a milk price policy in the Young Act of 1935. California adopted the main features of the price regulations that the court had said exceeded federal authority under the Commerce Clause to regulate commerce within a state. California retained its California Milk Marketing Order (CMMO) for more than 8 decades, despite the creation of a Federal Milk Marketing Order (FMMO) system under legislation later in the 1930s (Sumner and Wilson, 2000). This long-standing policy ended in 2018 with a vote to create a California Order as a part of the FMMO system administered by the U.S. Department of Agriculture (USDA).

California is an important component of the U.S. dairy situation and outlook because California remains the largest dairy-producing state in the United States, accounting for about 18.5% of U.S. milk production, down from a high of over 20% (USDA, 2018). With California dairy consumption making up about 12% of the U.S. total, California ships milk products to the rest of the United States and the world. Milk remains the largest California farm commodity by revenue (still slightly above almonds), and milk is central to the economy of the Central Valley. The dairy industry purchases locally-produced by-products and forage and supplies raw milk to the local dairy processing industry (see data from California Department of Food and Agriculture (CDFA), https://www.cdfa.ca.gov/dairy/dairystats_annual.html and from USDA, https://data.ers.usda.gov/reports.aspx?ID=17845).

In the following sections, I review the economic drivers of this historic shift in milk price policy, outline some economically important differences between the new California FMMO and the program it replaced, and explain some major economic implications of the policy change. My main findings may be stated succinctly. First, with economic stress on dairy farmers nationally (and in many other countries), California milk producers became especially concerned about low prices in the state relative to prices in many other regions of the country. Second, the federal price formulas will likely yield higher minimum prices for milk used for cheese, while federal rules will allow processors that had been required to participate under California rules, to opt out if they find doing so to be advantageous. Third, because the new federal regulations do not change the supply and demand fundamentals for milk production in California, there seems little scope for the federal order to cause major increases in milk prices compared to the California program that it replaced.