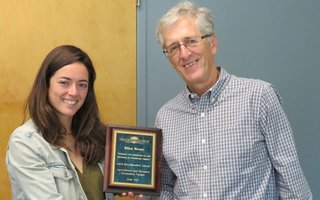 Ph.D. candidate Ellen Bruno is awarded for having the most downloaded article of 2016-2017 in the Giannini Foundation of Agricultural Economics ARE Update. Presenting the award is Professor Rich Sexton, a co-editor of the bimonthly publication.

Davis Agricultural and Resource Economics Ph.D. candidate Ellen Bruno received the award for the most downloaded paper in the ARE Update, the bimonthly outreach publication of the UC Giannani Foundation of Agricultural Economics. Bruno’s article is titled “California’s New Groundwater Law and the Implications for Groundwater Markets.” The paper appears in the March/April 2017 issue of ARE Update, and was downloaded by users over 2,600 times between its publication date and June 30, 2017.

Bruno is studying the implementation of California’s Sustainable Groundwater Management Act as part of her Ph.D. thesis research. Her work suggests that the rules regarding the formation of groundwater sustainability agencies under the law will influence the development of groundwater markets. For many basins, plans for sustainability will likely entail restricting pumping and assigning pumping rights to users. Bruno’s research shows that in these settings, implementing markets for trading groundwater pumping rights can lead to significant increases in economic welfare.

Proud to win the award, Bruno appreciates the opportunity allowed by the ARE Update.

“It’s an accessible way to get your research out there,” she said. “Especially if it’s something you’re already working on, it’s a good way to push forward.”

Bruno’s article is available to read on the Giannini Foundation website: https://giannini.ucop.edu/publications/are-update/issues/2017/20/4/californias-new-groundwater-law-and-the-implicatio/