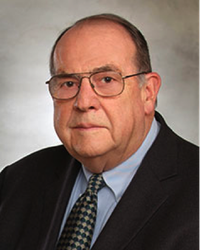 A leading academic in agricultural policy, he is best known for his research in international trade where he has published extensively. Dr. McCalla also served as the Chair of the Technical Advisory Committee of the Consultative Group on International Agricultural Research (CGIAR). CGIAR research continues to be dedicated to increasing food security, improving human nutrition, and ensuring more sustainable management of natural resources.

Upon his retirement from UC Davis in June 1994, he was appointed Director of Agriculture and Natural Resources at the World Bank. During his tenure, he led a major effort to revitalize the World Bank's commitment to rural development. Today the World Bank Group is a leading financier of agriculture – including $8.1 billion in new commitments in 2013 – seeking to assist 75% of the world's poor who work mainly in farming.

Since retiring from the World Bank in December 1999, Dr. McCalla has returned to UC Davis to teach several undergraduate and graduate courses in agricultural trade and policy. He served as Chair of the Board of Trustees of CIMMYT – the International Maize and Wheat Improvement Center headquartered in Mexico – from 2001 to 2005, and he was a member of the Board of Directors of the Danforth Plant Science Center in St. Louis from 1998 to 2012.

Alex McCalla continues to be in wide demand as a consultant and speaker on world food security. The global reach of his contributions to education, public policy and agricultural development reflect an enduring commitment to reducing rural poverty.

Watch Alex's June 3, 2014 convocation speech at the University of Alberta.